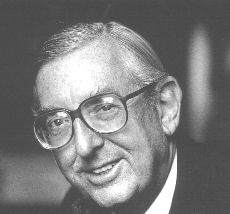 Educated at Stowe and Worcester College, Oxford, John Sainsbury joined Sainsbury's in 1950, and served as Chairman and Chief Executive from 1969-92.

He sits on the Conservative benches in the House of Lords, and served on the Joint Scrutiny Committee on the 2006 Charities Bill.

He married the former ballerina Anya Linden in 1963. They have a daughter and two sons.

John Sainsbury was one of three brothers who were responsible for taking the family business public in 1973. The second brother, Simon, a noted philanthropist, died in September 2006. The third brother, Sir Timothy, became a Conservative MP and Minister. Their cousin David Sainsbury sits on the Labour benches of the House of Lords as Lord Sainsbury of Turville, and served as Minister of Science and Innovation from 1998 to 2006.