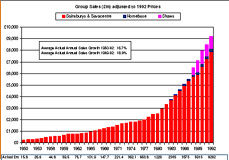 During that period, Sainsbury’s became the UK’s most successful supermarket chain. Between 1969 and 1992 sales grew by 19% a year on average, and profits by an average of 24% a year.

John Sainsbury has been Life President of J Sainsbury plc since 1992.

A history of the period, Sainsbury’s, The Record Years 1950-1992, written by Giles Emerson has just been published. For a copy, contact sales@johnsandoe.com.